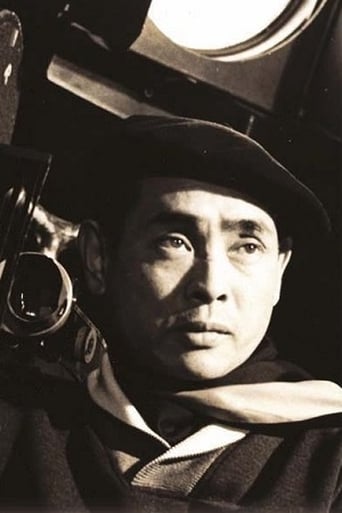 Although lesser known internationally than his fellow filmmakers such as Akira Kurosawa, Kenji Mizoguchi and Yasujirō Ozu, Keisuke Kinoshita was nonetheless a household figure at home beloved by audience and critics alike, especially in the forties through the sixties. He was also prolific, turning out some 42 films in the first 23 years of his career. For this, Kinoshita explained, "can’t help it. Ideas for films have always just popped into my head like scraps of paper into a wastebasket." Born on 5 December 1912 in Hamamatsu, Shizuoka Prefecture, about halfway between Tokyo and Kyoto, to a family who owned a grocery store, Kinoshita was already a movie fan when he was eight. Vowing to become a filmmaker, he was, however, faced with opposition from his parents. His determination to become a filmmaker finally moved his parents into letting him pursue his own career and his mother even secured him an introduction to the Shochiku Kamata studios, where Yasujirō Ozu, Mikio Naruse, and other famous directors worked. Without a university education, however, Kinoshita was not allowed to work as an assistant director and had to start as a photographer, for which he applied to the Oriental Photography School and graduated before he was finally admitted into Shochiku. There, he first worked in the film processing laboratory, then as a camera assistant, before he was advised by Kōzaburō Yoshimura to switch to assistant director. In 1940, Kinoshita was drafted into the war and went to China, but returned the following year due to illness. He re-entered Shochiku and was promoted to director in 1943. Adapting a famous novel, Kinoshita made Port of Flowers with a large cast and budget. The same year also saw the emergence of another new director, Akira Kurosawa, but it was Kinoshita who won the much coveted New Director Award at the end of that year. Throughout his career, Kinoshita made many films which were both critically and commercially successful, among which the best known were Morning for the Osone Family (Osone-ke no asa, 1946), Carmen Comes Home (Karumen kokyo ni kaeru, 1951) (made in Fujicolor, the first color feature of Japan[2]), Tragedy of Japan (Nihon no higeki, 1953), Twenty-Four Eyes (Nijushi no hitomi, 1954), You Were Like a Wild Chrysanthemum (Yagiku no gotoki kimi nariki, 1955), The Ballad of Narayama (Narayama bushi kō, 1958)), and The River Fuefuki (Fuefukigawa, 1960). He refused to be bound by genre, technique or dogma. He excelled in almost every genre, comedy, tragedy, social dramas, period films. He shot all films on location or in a one-house set. He pursued severe photographic realism with the long take, long-shot method, and he has gone equally far toward stylization with fast cutting, intricate wipes, tilted cameras and even medieval scroll-painting and Kabuki stage technique. Kinoshita received the Order of the Rising Sun in 1984 and was awarded the Order of Culture in 1991 by the Japanese government. He died on December 30, 1998, of a stroke. His grave is in Engaku-ji in Kamakura, very near to that of his fellow Shochiku director, Yasujiro Ozu. [Description above adapted from the Wikipedia article Keisuke Kinoshita, licensed under CC-BY-SA, full list of contributors on Wikipedia.]