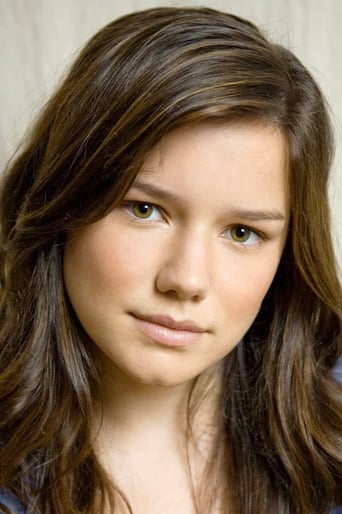 Hanna Mangan-Lawrence (born 5 March 1991 in London, England) is an Australian and British actress, best known in Australia for her role as Holly in the drama series Bed of Roses in which she received an AFI Award nomination in 2008 and a Logie Award nomination in 2009, and internationally as Seppia in the Starz historical drama Spartacus: Vengeance. Mangan-Lawrence started her film career in 2005 with the short films, Simulation 1201 and Galore. This was followed by a starring role as Georgie, in the short film Sexy Thing, which was accepted into the Cannes Film Festival. Mangan-Lawrence was the cast in the 2008 horror film, Acolytes, directed by John Hewitt, premièred at the 2008 Toronto Film Festival. In Acolytes, she played the role of Chasely, a naive and coquettish high school student. She subsequently featured in Nash Edgerton's film, The Square, as Lily. She was nominated for a Filmink award for 'Best Australian Newcomer' for this performance. In 2009, she appeared in the Australian period drama, Lucky Country, directed by Kriv Stenders. Mangan-Lawrence has featured in the Australian drama series, Bed of Roses, which screened on the ABC television network, playing Holly Atherton. In 2008, she received an AFI Award nomination for "Best Guest or Supporting Actress in a Television Drama" for her role in Bed of Roses She was also nominated for the 'Graham Kennedy Award For Most Outstanding New Talent' at the Logie Awards in 2009. In 2012, Mangan-Lawrence starred in the feature-film, Thirst alongside Myles Pollard, Victoria Haralabidou, and Tom Green. She also became a recurring cast member, Seppia, on the Starz television series, Spartacus: Vengeance. Mangan-Lawrence is the daughter of Maggie Mangan, an English teacher and playwright, and her father is Ray Lawrence a geography, economics and business studies teacher. She has a half-sister Rosene, two half-brothers Liam and Reuben, a stepsister Zoe and stepmother Paddy, also a teacher. She has represented Australia overseas as a member of the elite gymnastics team. In 2005, she won "Acrobat of the Year – International – Senior" at the Gymnastics Australia National Awards. In 2009, Mangan-Lawrence completed her high school education at the Newtown High School of the Performing Arts through Pathways.