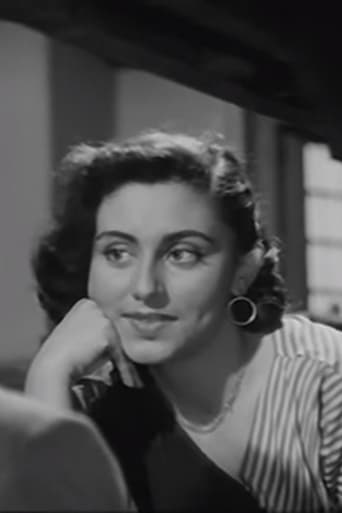 Born in Rawalpindi on April 3rd, 1937, of Hindu-English parentage, Vinita spent the first seven years of her life in Kashmir. Educated at various hill-station schools, Vini came to Bombay in November 1954, some time after she had done her Senior Cambridge in Bangalore. In Bangalore, she had been a member of the Bangalore Amateur Dramatic Society (the B.A.D.S.) and appeared on the stage in Tagore’s “Sacrifice” and one of J. B. Priestley’s plays. It was in Bangalore that Guru Dutt first saw her and, struck by her good looks and vivacious personality, offered her a film contract. He took some photographs of her back with him to Bombay and then wrote to her, offering her a role. The terms were not exactly flattering and Vini and her mother soon forgot about the episode. In Bombay Vinita met Anwar Hussein, an old friend of the family, and, through him, Chandulal Shah who gave her a small role in “Oot Patang,” the film he was then making. While working in “Oot Patang”, Vinita visited the Mehboob Studios where, once again she met Guru Dutt, who had gone on the floors with his film, “Mr. & Mrs. 55”. He offered Vinita the role of the Anglo-Indian office girl Julie and she accepted it. At that time, Vinita’s screen name was Yasmin and her performance, according to the critics, displayed a confidence, ease and aplomb which enabled her to even steal scenes from the seasoned comedian Johnny Walker. It was also at the Mehboob Studios that Vinita met Zul Vellani, who asked her to play Desdemona in a Theatre Group open-air presentation of “Othello.” This, indirectly, led to her next film contract. Alex D’Arcy, the Hollywood actor who came to India to star in Filmistan’s CinemaScope and Technicolor production, “Bombay Flight 417,” met her and was impressed by her. Her film test, for which she was made up by her future husband, Jimmy Vining, was a great success and Vinita, now using her own name on the screen, landed the role of Rukhmini. She and Jimmy soon married. (The above biography has been adapted from a Filmfare magazine interview in 1956, courtesy of Cineplot.com)